History
Lionel classified the 1666 steam engine as a Prairie-type steamer. It is a mid-size locomotive and contains several of Lionel's quality features. It shares its boiler casting with the 224 -- which was sold in O gauge sets. The boiler castings are the same on these steamers as are the internal workings. The only difference being the collector assemblies: the 1666 has slide shoes and the 224 has roller pick-ups.

The 1666 was introduced during the first full year of postwar production, 1946. The Prairie steamer is one of a few select items Lionel brought forward from the prewar era into the postwar era. The 1666 and the 224 marked the beginning of an era where Lionel catalogued a Prairie-style steamer in every production year through 1969.

During its brief two-year production cycle, the handrailings and cab numbers underwent changes. These changes include:

The tender is usually numbered 2466W; however some 1947 versions are found with a 2466WX. Both tenders contain a whistle. 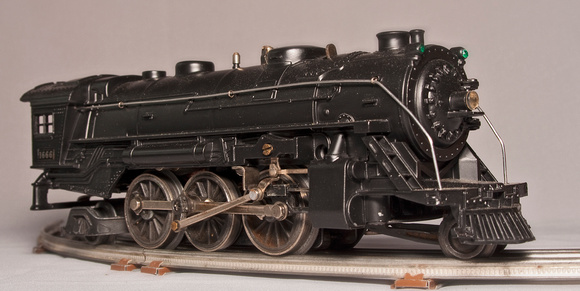